Chronic Hepatitis B Virus (HBV) infection is strongly associated with the progression of liver fibrosis, cirrhosis and hepatocellular carcinoma. Despite intensive study, the detailed mechanisms leading to HBV induced liver disease have not been fully elucidated. Previously, we reported a mosaic distribution of viral antigens and nucleic acids at single-cell level in liver tissues of chronic hepatitis B (CHB) patients and proposed a ‘three-stage model’ of HBV infection in vivo. Here, we explored whether the different stages at cellular level is functionally linked with fibrogenesis. Strikingly, we observed a tight spatial relationship between the invasion of collagen fibers and transitions from S-rich to DNA-rich stage. While S-rich cells mainly localized within minimally fibrotic tissue, DNA-rich cells were often closely surrounded by a milieu of stiffened extracellular matrix (ECM). cDNA microarray and subsequent validation analyses revealed that S-rich cells manifested elevated ribosomal proteins and oxidative phosphorylation genes in a disease phase-dependent manner. On the other hand, DNA-rich cells exhibited gradually deteriorated expression of hepatocyte-specific antigen and transcriptional regulator in parallel with the progression of hepatic fibrosis. Finally, during fibrogenesis, inflammatory genes such as IP-10 were found to be expressed in both portal infiltrated cells and surrounding parenchymal cells which resulted in suppressed antigen expression.

Based on the observations in this study, we propose an updated model of HBV life-cycle in a histological context, in which inflammation and fibrogenesis are incorporated (See the figure below ). In immune quiescent phase of the CHB infection (equivalent to fibrosis stage 0-1), the majority of the HBV infected cells exhibited an S-rich state. The infected cells harbor high level of viral antigens such as HBsAg and possibly HBx which boost some of the essential cellular activities such as protein synthesis and energy conversion. Spontaneous transition into DNA-rich state is initiated due to the loss of immune-quiescence and subsequent activation of HSCs and deposition of collagen fibers (equivalent to fibrosis stage 2-3). The infiltration of immune cells and resulting secretion of inflammatory mediators trigger hepatocellular inflammation gene expression and suppress the expression of viral antigens and might also contribute to S-rich to DNA-rich transition. The stiffened ECM milieu and associated inflammation inhibited the major hepatocellular functions by down-regulating key transcription factors such as HNF4a. Further accumulation of rigid ECM (pseudolobule formation) around HBV infected hepatocytes eventually leads to the deterioration of these cells, part of which are finally immersed into the fibrotic tissue (equivalent to fibrosis stage 4). As a result of inflammation and advanced fibrosis, a significant number of HBV positive cells convert to the latent stage with minimal viral expression and replication.

Taken together, we propose that liver inflammation and accompanying fibrogenesis is spatially and functionally linked with the transition of virological stages at cellular level. These transitions occur possibly due to an altered hepatocyte transcription profile in response to a transformed ECM environment. The collective viral and host activities shape the histological alterations and progression of liver disease during CHB infection. 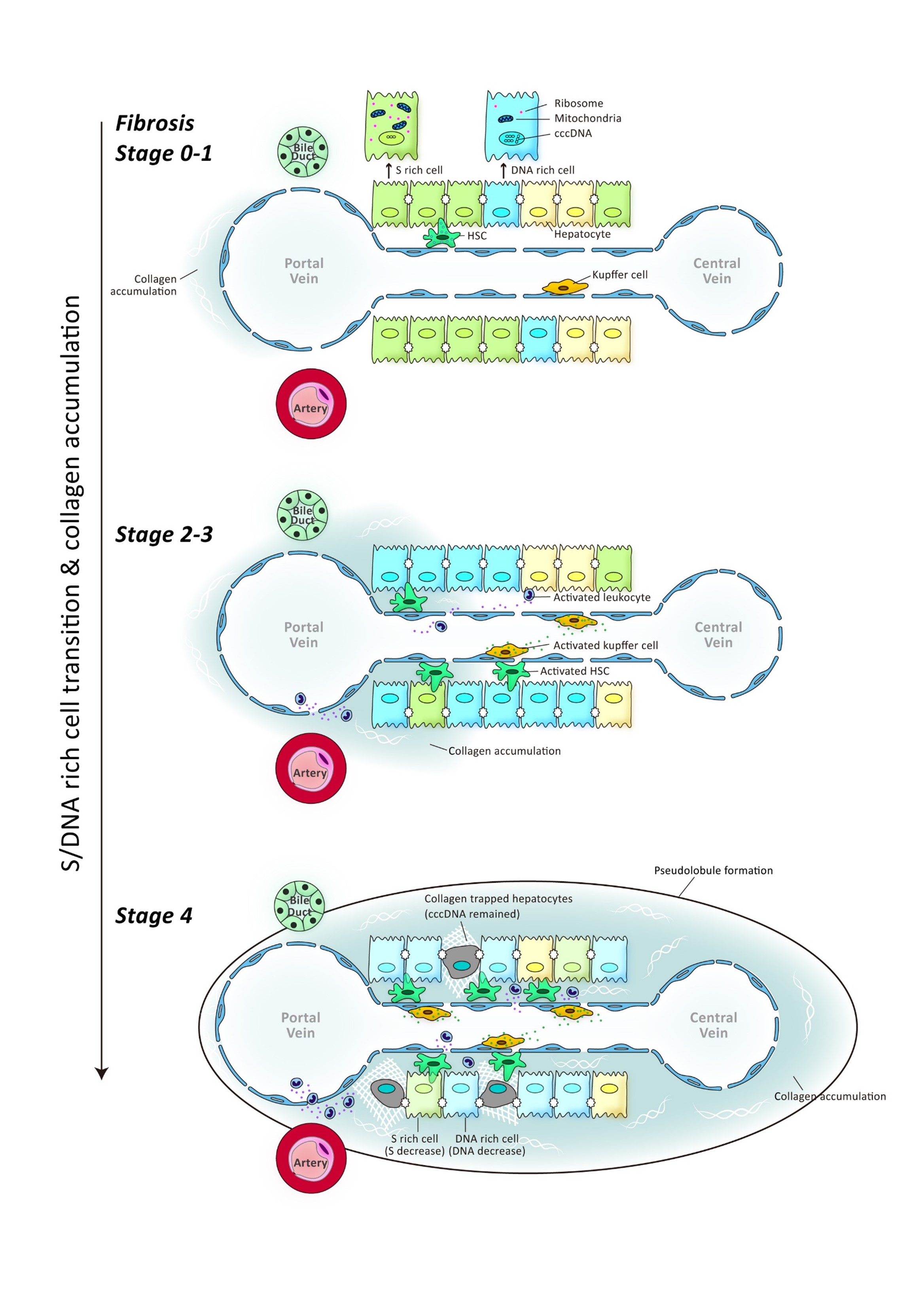 Schematic illustration of the updated model of HBV life-cycle in the histological context.